Maria Artemis’ show at the Zuckerman Museum was highlighted on September 23 as she sketched the shades and shadows cast by her sculpture as the noontime light of the Autumn Equinox advanced upon the walls and floors of the new museum. Much of Maria’s work in this show is about light and shadow, so today’s gorgeous sunshine lent a particular focus and resonance. 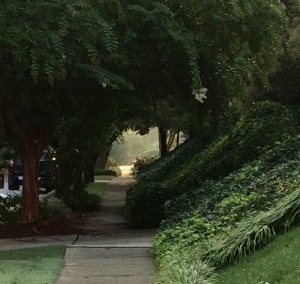 Atlanta in late summer. This is the signature time for the “city in the trees”. An explosion of greenery has reached apogee. Vegetative tunnels transect leafy old neighborhoods. Humidity so thick that you can see and feel it. An ambience unique and instantly recognizable defines a soul of place. This article appeared as an op-ed piece originally on the Saporta Report and is re-posted here:

Growth has been, for decades, one of the Atlanta’s primary economic forces. Development, infrastructure, manufacturing, engineering, and architecture are all part of the growth economy.

In aggregate, the markets that enable growth have been second only to the energy markets (fuels and electricity) in Atlanta.

Successful industries require innovation and investment. The growth industry is no different. Lately though, accommodations needed for growth have been out of balance.

In particular, the arteries of transportation are becoming ever more congested, and the public realm has come to be seen as hostile. New and wider roads have been the normal solution to the problem.

However, an ever expanding sea of asphalt has begun to tear at the fabric of urban life. Increases in congestion and asphalt have begun to damage much that has made the city attractive. The “city in a forest” has come to be seen as the city of traffic jams, pavement and heat.

A recent event opened my eyes to another view of Atlanta. A colleague from Boston was in town for meetings and commented that she wished that Boston’s public transportation system was as good as Atlanta’s. I was floored by her comment. Isn’t Boston’s system excellent and Atlanta’s second-tier?

My colleague had flown into ATL, boarded the MARTA train to Decatur, walked from the Decatur station to a downtown Decatur hotel. She spent a pleasant evening in Decatur, and the next morning she took the train north to Doraville for meeting preparations. Around noon we took the train downtown for our meetings. She then hopped a train back to the airport and debarked for home.

As a visitor, she experienced an Atlanta that few auto-bound residents perceive. Atlantans, however, seem trapped in a belief that roadway improvements are the only way forward and that huge inputs of public funding are required to make the city more inviting. Perhaps an alternate vision is called for rather than a bigger road network.

Fortunately, we do not have go very far to find a great example the results that can be achieved through a change of direction.

Decatur is the place, and it is right next door. Decatur made a radical choice to reorient itself to the realm of the pedestrian. They went on a road diet. They narrowed Ponce De Leon Ave. to two lanes. They replaced auto capacity with shady sidewalks, on-street parking, and bike lanes. They focused a vibrant living environment right on top of their fine downtown train station.

Rather than separating residents from transit with vast expanses of asphalt, Decatur actually mandates a mix of uses – residential, working, and recreation all together within the compact area of downtown. They placed emphasis on livability over throughput, and the yield has been one of the most desirable urban environments in the US.

Atlanta, to date, lacks a focused commitment to an urbane lifestyle. Look at the areas surrounding most of the intown train stations. While originally envisioned as community centers, policies were never put in place to make transit development desirable.

Stations are separated from users by blasted looking parking lots, high fences, atrocious urban design, dangerous roadways and sprawling commercial districts. The stations are not friendly to pedestrians or bicyclists. Is there any wonder that few people use them?

Much of Atlanta is actively hostile to people who are not in cars. Just walk along the edges of Piedmont Park if you don’t believe it.

Atlanta’s most popular park is separated from adjacent neighborhoods by four lane arterial streets with dangerously narrow sidewalks and fast traffic. Sidewalks everywhere in Atlanta are irregular and full of obstacles.

And yet the City’s priorities appear to be on big ticket roadway expansion and transit projects.

A really interesting fact about urbane environments is that they are not expensive. With few exceptions, the changes that have made Decatur so alluring have been the result of a switch to people-oriented development patterns.

Looking further afield, Manhattan, of all places, has been on a road-diet binge in recent years. Where money is scarce for pedestrian and bicycle projects, impatient

Manhattanites have simply narrowed roads by installing boulders and planters in the streets thus converting roadway to bike lanes and people areas. Portions of Broadway near Times Square have been closed and famously filled with plastic lawn furniture.

The west side freeway is now a beautiful parkway. People love it. Manhattan now sees thousands of people riding bicycles in simple dedicated bike lanes for both work and fun.

Urbanity is a state of mind. Great cities do not become great by building freeways. Never have, never will.

It is imperative to remember that cities are, first, places for people. When this attitude takes hold in Atlanta we can begin a return to healthy growth.

The old way is gone.